PharmaVentures is pleased to announce that it has acted as advisor to CM Technology Oy (CMT) on its divestment of certain assets to Yokogawa Electric Corporation (Yokogawa). The assets relate to CMT’s world leading capabilities in cellular imaging and analysis.

This transaction is the latest in a series of successful global deals in the life science research tools sector for PharmaVentures’ clients.

Fintan Walton, CEO, PharmaVentures, commented: “PharmaVentures is delighted to have delivered a successful and valuable outcome for our client in a sector where deal activity is bouyant.”

Adrian Dawkes, VP, PharmaVentures, who was lead advisor added: “Cellular imaging and analysis technologies are increasingly important in areas such as regenerative medicine and stem cell technology. Japan is leading the way in many aspects of this research and Yokogawa is therefore an ideal home for CMT’s technologies”.

Over the past 23 years, PharmaVentures has acted as advisor to over 700 global pharmaceutical and biotechnology clients in transactions covering licensing, merger, acquisition, divestment and joint venture activities for companies world-wide.

Are you Planning to Divest R&D or Manufacturing Facilities? 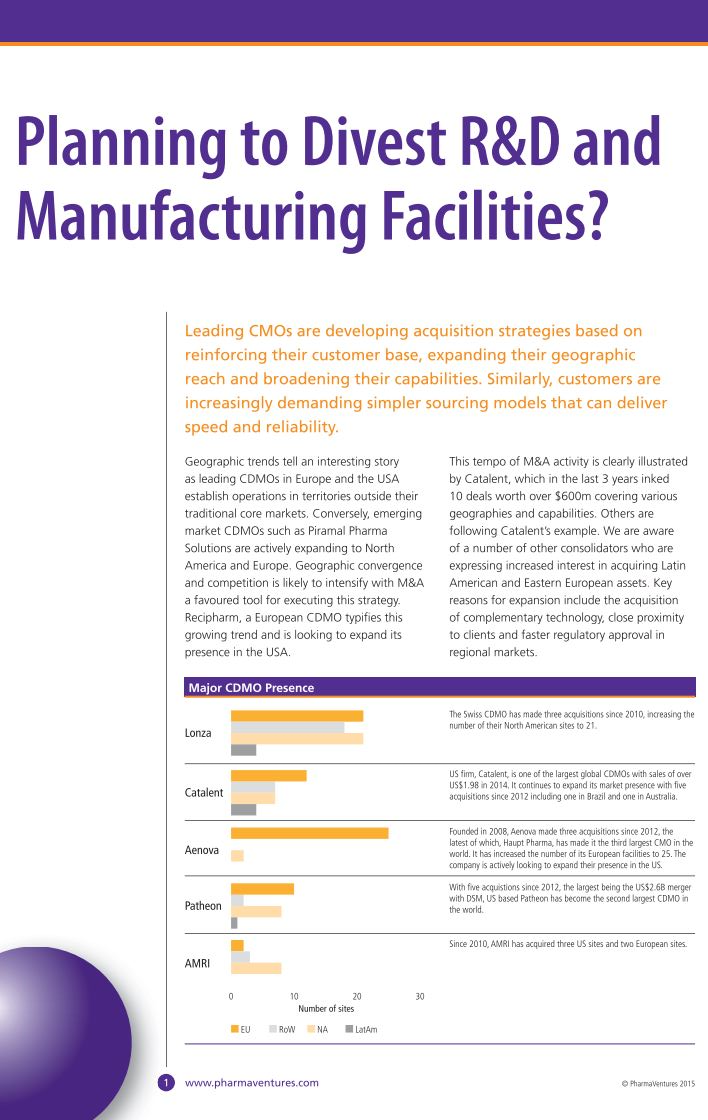 PharmaVentures and PharmaTelevision are delighted to be Media Partners at the World Stem Cells & Regenerative Medicine Congress 2015.

Dr Adrian Dawkes will be recording a series of interviews for PharmaTelevision with key people attending what looks to be a very exciting event.

London was overjoyed at being elected as host city for the 2012 Olympics, but also devastated by the July 7th terror attacks. The death of Pope John Paul II, that same year, marked the end of an era in the life of the Roman-Catholic Church whilst in Germany, Angela Merkel becomes their first female Chancellor. 2005 also played host to Hurricane Katrina in the United States when it flooded New Orleans, the launch of YouTube and it is where Terrapinn’s stem cell story starts.

A decade later and it is a delight to be celebrating the 10th anniversary of an event that was key to the foundations of this medical revolution.

“10 years ago when we launched the World Stem Cells Congress, the stem cells sector was one of scientific interest. Focussing on the challenges of how to transform the cells, this conference and exhibition was quite small and the topic area quite niche. Attracting only around 80 people, word of the industry’s potential had not yet reached the masses”, says Derek Cavanagh, Project Manager of World Stem Cells & Regenerative Medicine Congress 2015. He goes on to speak about how in about 2010 the sector underwent an important transition. Key industrial players as well as leading pharma companies had come to realise the commercial opportunities with stem cells, which would change the sector moving forward.

This in turn was when the event would shift in focus from solely science to incorporate the commercial aspects as well. Both translational medicine and regenerative medicine were added to the conference programme, and an emphasis on achieving market access was enabling successful commercial development within the industry. As industry challenges shifted towards lack of investment and scaling up manufacturing and distribution, discussions moved on to the new business models that were coming into practice as the stem cell sector developed and moved away from traditional pharma models, which would inevitably catapult the industry to where we are now.

What is now the World Stem Cells & Regenerative Medicine Congress is proud to be welcoming an audience of around 600 attendees to London this May. “This year we will be introducing additional content on tissue engineering and organ regeneration as well as the collocated Investor Forum and Cord Blood World Europe. Delegates will be able to hear and learn from over 70 speakers across the 3 days as well as partake in hundreds of meetings on-site as collaborations become key to commercial success of the industry” explains Hannah Yates, Conference Manager, World Stem Cells & Regenerative Medicine Congress 2015.

With a large volume of business generated over the years at this event, key industry supporters such as Cell Therapy Catapult, GE Healthcare and Lonza, and leading keynote presentations from the likes of Chris Mason, Perry Karsen, Keith Thompson, Michael May and Susan Solomon, World Stem Cells & Regenerative Medicine Congress is where the cell therapy and regenerative medicine sectors come to do business.

Oxford, UK. March 4th 2015. Following another year of successful deal making, PharmaVentures is pleased to announce the appointment of Graham Combe who has joined its Business Development team. Graham has over 18 years’ experience in business development within pharmaceuticals, biotechnology and media/events sectors.  Previously, he ran his own business Biosell, which specialised in providing sales and marketing support to media and event companies predominately within the Pharmaceutical and Biotechnology Partnering marketplace.  Graham also worked in business development for 8 years at Nature Publishing Group (NPG), the publisher of Nature magazine and Scientific American. Graham has a degree in Chemistry from University College London (UCL). Fintan Walton, CEO, PharmaVentures commented: “We are always focused on providing the right solutions for companies wishing to partner or do M&A and Graham brings a wealth of experience that will be of immense benefit to our clients” Graham Combe added: “I have long admired the achievements of the PharmaVentures team and look forward to working with their clients to ensure they have the best outcome when it comes to their deal making”

PharmaVentures is pleased to announce that it is to increase its life science presence in North America by establishing a new base in Boston, MA. Starting this month Dr Adrian Dawkes, VP, will be dividing his time between the USA and the UK.

This announcement follows a record year for mandates in M&A and licensing for PharmaVentures.

Dr. Fintan Walton, CEO, PharmaVentures, commented: “With America still the biggest market for healthcare and with Boston leading life science innovation it makes immense sense for us to have one of our most experienced deal makers on the ground. Increasingly our clients need access to the opportunities that America offers and Adrian’s contacts and experience will be of great value to them.”

Dr Adrian Dawkes, VP, added “With a growing number of pharma clients and deals in America, including those involving major pharmaceutical companies such as Pfizer and Merck and leading life science companies, we would like to provide support and interact directly with leading innovators and healthcare companies in The USA as well as worldwide.”

Should you wish to meet up with Adrian to discuss your needs and our capabilities please drop him an email or give him a call on +44 7931 428487.