Pharma is attracted to early-stage antibody deals in Oncology

Antibody therapies are successful in increasing patient survival; however, statistics show that there is still room to significantly improve clinical benefits.

Until more companion biomarkers become available, early utility of high cost antibody therapeutics is unlikely to become mainstream. While antibody therapeutics for cancer clearly offer clinical benefits over other drugs, the cost of development and manufacture is high.  In many cases, these therapies only extend life by a relatively small amount and thus their high costs are sometimes hard for payers to justify.

Deal trends over the last five years reveal an increase in antibody deals in oncology from 2009 to 2011 and then a plateau until 2013. Discovery and pre-clinical stage deals prevail in oncology antibody therapeutics, as opposed to other therapeutic areas, where the majority of deals are being made in later Proof of Concept (POC) and Proof of Principle (POP) stages. Late-stage deals generally command larger upfront payments by the licensee, as much of the risk has been mitigated and paid for by the licensor. Higher up-fronts can make a deal unattractive if insufficient scope remains for the licensee to generate adequate return on their investment despite the higher probability of the therapy making it to market. 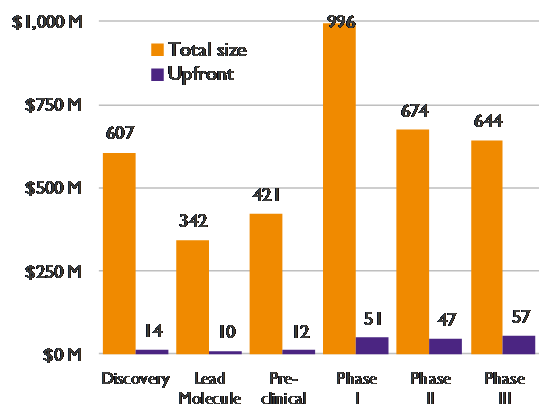 On the contrary, in early-stage deals, only a low upfront payment is usually at risk but is coupled with a high overall deal value incorporating significant milestone payments that may never become due if the drug fails in later stages of development. It is w

orth noting that the number of late-stage deals has been declining, while the average deal value for discovery stage assets is significantly higher than might be expected. Gaining rights to early-stage assets gives the licensee more flexibility to shape its development. Furthermore, early-stage assets often comprise of “platforms” which could deliver multiple new drugs. These are often captured through option deal mechanisms. Increased competition for early stage assets appears to be driving total deal values higher in this sector.

​Deeper analysis of discovery stage deal values show rises up to 2011, but then a decline in 2012 and a major drop in 2013. This might reflect satisfaction of short-term pipeline needs of major Pharma companies and an increase in acquisition of assets or single asset companies rather than licensing.

A clear picture emerges of where Big Pharma is currently spending their deal money. Stand-out areas are platform technologies such as Antibody Drug Conjugates (ADCs) and the new approach tackling checkpoint inhibitors. As such, the majority of Big Pharma companies are following antibody-based oncology therapies. It will be exciting to see how these new technology combinations emerge as new classes of cancer treatments and if they will address the cost / benefit conundrum that will allow earlier patient treatment and improved patient outcomes.